Colt style SA: Theoretical use of the half cock notch as a safe carry option. 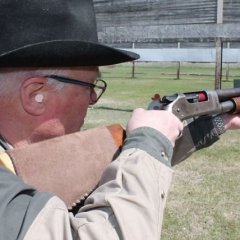