Woman safes many lives - but SHHHHHH! 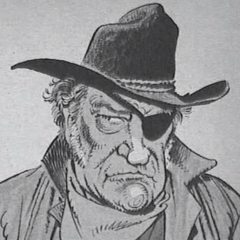 By Bart Slade,
May 27 in SASS Wire Saloon