Crosscut Hardy is a member of cowboy town destroyed by hurricane 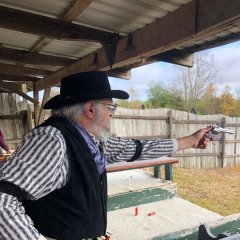